Some unusual objects in the vicinity of Sainsbury’s local this week…Golden shoes, aÂ Piano…

Brent Council have published on 8th May a planning application for the redevelopment of the Good Ship site. The application proposes to create flats at upper levels but more controversially to change the use of the ground level from Public House to D1 medical use (dentist/optometrist/doctor/Physiotherapist). The planning, design and access statement is worth a read. The Good Ship was (before its closure in October 2017) the last live music venue on the Kilburn High Road and one of the few nightlife venues remaining. Please click here to find out why we think the site should be retained as a Music/Comedy venue and comment on the planning application.

The Good Ship received a lot of coverage after John’s explanation on why he closed down (featured in theÂ CNJ on 08th May). CouncillorÂ Shama Tatler, said that the Pub Protection policy would be considered and that people should comment on the application. Tom Miller admitted that longer opening hours could be requested to make the venue more viable. 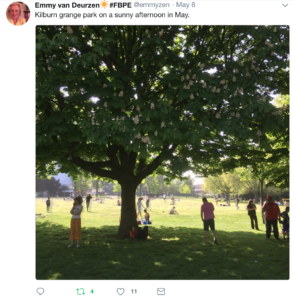 If the rain this week-end has brought you inside you may want to read this book.

The last Irish bar on the Kilburn High road,Â  the Kingdom,Â  closed last week-end. Allegedly rents and rates had been too high. It is the end of an era for what was once County Kilburn it seems. However rumors are that Vince Powers (a well known character in Kilburn, founder of Mean Fiddler and previous owner of the Powers Bar) will be taking over the building.

Calling all 11-16years old people. The Sidings Community Centre is running weekly Box Fit classes on Tuesdays from 5pm to 6pm. And it is FREE. A great chance to increase your fitness…and all equipment is provided. Check out their website for other activities including youth clubs and other fitness sessions.

If you didn’t get a chance to have your electronics fixed on Saturday, the next restart party will be on 21st July, so keep them aside and see if they can be re-used then.

Do you have bicycle in need of repairs or maintenance? then The Cyclestatic Shed on Streatley road could help. A Â£5 donation will allow you to use all their tools and knowledge. They also undertake full repairs at a fee. Open every Saturday from 1.30pm to 4.30pm.

This sounds fun (and messy!). The Kingsgate open studios weekend 22-24th June will be hosting a paint splattering party.

On Monday there was a large protest outside the newly rebranded Kiln Theatre. Is the campaign “Our Tricycle, not your Kiln” gaining momentum? Is our Theatre a community theatre or a private enterprise?Â  What is its legal status anyway? Controversially the branding agency (Koto Studio) deleted their tweet attempting to justify the need for a change of name. But we had it covered. 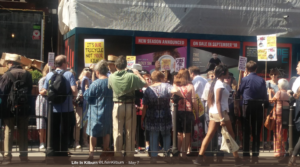 Brent council have finally responded to complaints about the growing homeless population at the north end of the Kilburn High road near the tube and overground stations after the Brent and Kilburn Times ran an article. A new roughsleeper appeared on Friday at Brondesbury station, while Fayrouse (opposite Kilburn Station) boarded their forecourt in an attempt to block access after 3 people designated that space as their temporary home. 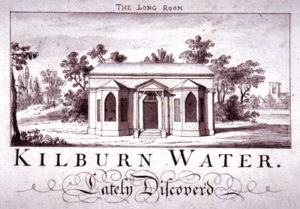 Dick Weindling, our local historian, published a very informative blogpost on the location of the once famous Kilburn Well.Â He will be doing a talk on the history of Kingsgate Workshops on 23rd June at 3pm as part of the Kingsgate Open Studios Week-End. And now that you know all about the Kilburn Well, get to know about the Kilburn Bridge.

Thursday saw the grand opening of the Kingsgate Centre (day care centre for Older People and Dementia sufferers). It would be interesting to know what will happen to the now vacant Netherwood Day Centre.

K2K radio successfully moved to the Granville centre, but it looked hard work.

The Granville Centre in South Kilburn is celebrating its opening this week with events all week, culmunating with a party on 20th May. Full list of events here. 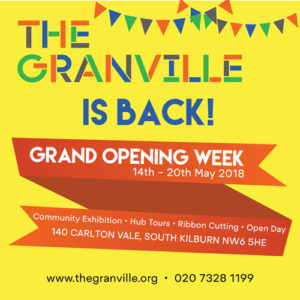 Sunday nights are quiz nights at the North London Tavern.

And May is still “walking” month

25th of May. A new billboard will be showing at the side of the Kingsgate workshops

2nd June from 12pm to 3pm is the Fordwych Road summer fair.

If you have news, an event, some local history or just a favourite corner of Kilburn youâ€™d like to share please email us news@lifeinkilburn.com or tweet to @lifeinkilburn.