South Kilburn residents have  backed Brent’s plans to continue with the regeneration of South Kilburn. 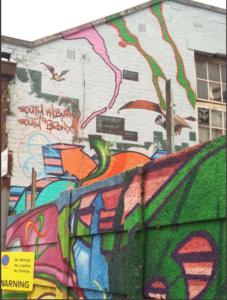 We attended the meeting on 16th October about the Kilburn Street Party on 11th July 2020. Here is a summary with the presentation.

New electoral wards are being proposed for areas of Kilburn. Iverson Road could be split across 3 wards, Loveridge and Maygrove 2 wards plus other parts of Kilburn may become South Hampstead. Comment before the 11th November.

Ever noticed this building on Cotleigh Road? If the boundary commission new draft plans are approved it could move from the Kilburn Ward where it has always been to ‘South Hampstead’.

This bridge, that was in the Kilburn Ward until 2002, when it became a West Hampstead Ward bridge, could become a half Kilburn and  half Fortune Green bridge if the revised ward arrangements are agreed!

After repeatedly unloading their stock illegally at busy times on the Kilburn High road, with complaints ignored, is it time to boycott Tesco Express?

And on supermarkets, we appreciate the fact that Sainsbury’s local on Kilburn High Road are now employing a security guard at all times, with a body worn camera. This has certainly helped reduce theft and reselling crime. We also applaud them for introducing greener packaging.

The Met Police have launched a new way of reporting dangerous driving and collisions, that is much easier than before. So get reporting…

Seen something suspicious? This week police officers have been targeting suspected drug dealers across wards. Do contact crimestoppers to help our local Police target criminals.

Meanwhile other cars continue to illegally park on the pavement. And it’s no wonder with no enforcement by the councils.

King of Naan, Kake-di-Hatti will open their first branch outside India at 267 Kilburn High Road. Check out their website. The vegetarians amongst us will be happy, no meat in sight.

From one chicken shop to another. Peri Peri chicken are changing name, so now we’ll have a Valley next to a Cottage… No more needs saying!

Vape hut at 331 Kilburn High Road has closed and will become…. hold your breath…… a barber shop.

The Kiln are starting a choir. More info if you’d like to join here. They are also starting a coffee morning every last Tuesday of the month, starting from 29 October at 11.00am. They have been named as one of the best fringe theatre’s in London! Congrats.

If you have visited St Augustine’s, have you noticed the beautiful floors?

Ever spotted the Brondesbury Arms in Chichester Road?

We’re so happy to see that a cigarette ballot bin has finally been installed on Kilburn High Road! Less happy to see how pessimistic you are about the likelihood of an English victory at the rugby World Cup!

Remember this consultation about Town Centres in Brent? We have not seen the promised report. Have you? You have until the 3rd of November to make your voice heard about the Night Time Economy Plans for Kilburn. And because Brent love consulting, your views are sought on the local plan. What a fitting display from Kilburn Station… If only consultations turned into actions…

Bloomsbury residents have gone through the details of the Camden Veolia contract. A long piece, but the conclusion is that using the Clean Camden App is the only way our streets will be clean. So get reporting…

The herbs planted in the garden at Kilburn tube station have gone to good use by one local.

The scaffolding outside Savers is still up and the license has been extended until 16th November. Does it really take 8 months to do maintenance work?

The rich music history of Kilburn always comes back to the surface on Twitter. Here is Morrissey, from the Smiths in 1986 , who had his red see-through shirt ripped in the National. Evidence here.  Kurt Cobain’s cardi (that he seems to have worn at the National in 1991) has sold for £260000. Our Wurlitzer, in the State was featured in the release of newly mastered organ music. And it’s true,  the Beatles played twice in the Gaumont State, once on 23rd October, 55 years ago.

Want to know more about the National? Here is a post by Dick Weindling, with a list of acts at the bottom.

Did you know that Supper Clubs, Underground Restaurants were started in Kilburn 10 years ago? Here is your chance to try the original underground restaurant on 30th November.

Following in Camden’s footsteps, Brent are launching a Climate Assembly. And what a better place to film the promotional video!…  under the pigeon plagued bridges  and next to one of the most polluted road in Brent! It will take more for Brent to become green than to change the colour of their logo.

What do we need to sort out the pigeon issues in Kilburn? A flying squad? A ministry for pigeons? or simply active Councillors?

And because Kilburn is Kilburn…

Until 30th November ‘When the crows visit‘ at the Kiln

From 29th October- New Exhibition at the Ben Uri Gallery.

From 30th October to 13th December- New Exhibition at the Ben Uri Gallery.

31st October The Franklin Electric at The Fiddler

11th November ‘TOUTS‘ at the Fiddler

13th November ‘The Hooten Hallers‘ at the Fiddler